You are here: Home / Crafts / How to Make a Pom-Pom

Ok. We need to gather our things.

That’s pretty much it! Unless you want to listen to some favorite music or a podcast or audiobook OR watch a video or movie while you pom-pom.

Here are three of my pom-pom makers all opened up. 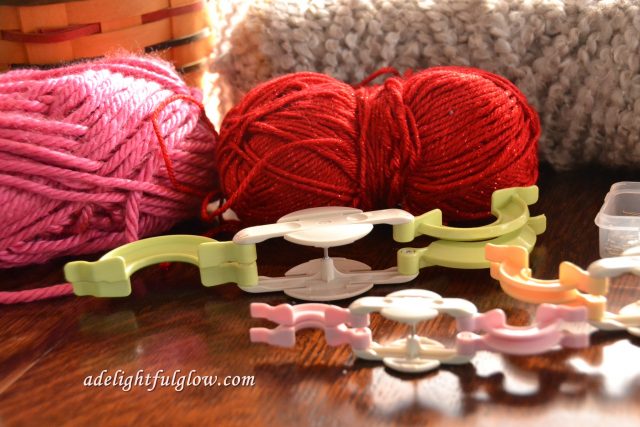 Simply start wrapping yarn around one end of the pom-pom maker.

Wrap till it’s covered and full. With bulky or super-bulky yarn this doesn’t take too long.

There’s a little notchy-thing at the far end. Run your yarn into this to hold it and clip it with your scissors.

Fold wrapped side in to the middle of pom-pom maker. 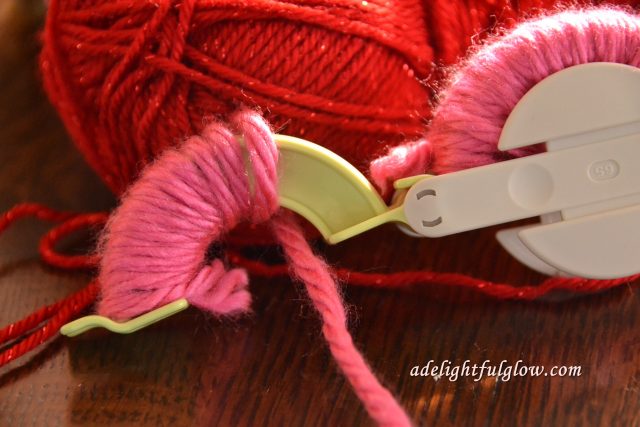 Begin wrapping the next side. 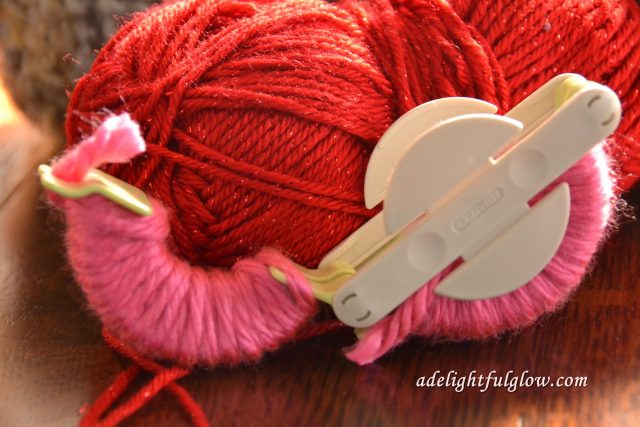 Around and around until done-and-done!!

Fold this side in to and now you have this!

A pom-pom maker with wrapped yarn.

Take your scissors and begin cutting right down the middle of the wrapped yarn. There’s a groove in the pom-pom maker and your scissors will easily follow it.

{My scissors came from Stampin’ Up years ago. I love them. They’re very sharp and the size is perfect for pom-pom projects. They have a very short cut. They clip. You would not want to use these for cutting material for a project. It would take forever!! Here’s a pair that Stampin’ Up offers now.}

Now open pom-pom ends back up. You’ll have a look like this.

DON’T TAKE THE POM-POM MAKER APART YET, THOUGH! Only open each end/side.

Now, take yarn and run around the middle of the pom-pom maker.

Pull it up snugly and tie it.

You’re tying it together to creat the pom-pom. Otherwise you’ll only have a bunch of short, loose yarn strands!

After the tie-it-together yarn is snugly in place, pull your pom-pom maker apart.

You have a pom-pom!!

And the pink pom-pom wreath I made for my Mother is in this post…………….

And there is a pom-pom garland and a bunch of pom-poms and two pom-pom wreaths in this post…………..

I definitely got bitten by the pom-pom bug! 🙂

One of my friends recently bought pom-pom makers and she got this Jumbo pom-pom maker. It looks like fun to see a great big pom-pom created with it! She and her daughter were loving the pom-pom makers.

Have you ever made pom-poms? I’d love to know!