You are here: Home / Family / In Which We Make a Super-Size Butterhorn

My son has been asking for butterhorns. Our weather cooled off and the chill always makes it sound fun to bake and have the warmth of the oven and the yummy, homey smells of the said baking. We had a rainy, gray Monday, so we stirred up butterhorn dough and set it to raise.

My son came around about the time I was ready to roll out the dough and form the rolls, so I enlisted his help. He rather likes to roll up rolls. He thought it would be fun to make a gigantic butterhorn, so I said, “Go for it.”

So he did. He used 1/4 of a circle of dough for one roll instead of cutting it into three pieces like we normally would. I think he was pretty pleased with how it turned out and he totally enjoyed eating it. He didn’t end up eating it all in one setting, but that might partly be because he had already eaten a normal size roll fresh out of the oven.

I told him I wanted pictures before he ate it! He happily obliged, except for a little nibble from one end that he couldn’t resist! 🙂 My kiddos are pretty used to me taking pictures of all kinds of things. That’s another plus of blogging for me! I like to take pictures and I took a lot before I started blogging. Blogging has reminded me to take pictures more often, though, and I’m glad! 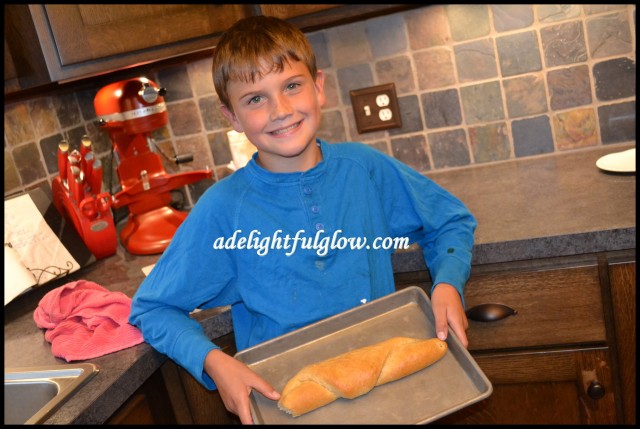 Let’s hear it for gigantic butterhorns!!