I wanted pictures of Renae and me all pressed and dressed and ready to head to the Living Proof Live Simulcast. I asked my dear man to play photographer for us and he obliged.

We were up bright and early, since we were heading out at 7 a.m. to drive to the city and arrive in the 8:30ish range.

We started getting a little silly….and I am very good at closing my eyes in pictures! {If this was considered a particular talent, I would so excel at it!!!}

At this point, our cute photographer was cracking us up. When he picks the camera up, he likes to mimic a certain-photographer-wife of his and snap a WHOLE bunch of pictures and turn the camera sideways and zoom in and out, all in a muchly exaggerated manner.

I greatly appreciated his efforts and antics. He makes me laugh often.

Oh, I’m still so happy about attending the Living Proof Live simulcast event. It was so inspiring and reviving!

and somewhat the outfit she had on in this post….

except she wore her cute ruffled scarf around her neck instead of wearing a belt. She made the scarf and has made several of them. They’re so fun! In fact, just this week, I showed some of them in my Yarn-Along post over here, if you missed it.

{By the way, we DID wear shoes to the event. We did NOT go barefoot.} {Just for clarification.} {I don’t want anyone losing sleep over whether or not we wore shoes when we left.}

Knit skirt for me again! My tee, I had last year at the simulcast. Renae and I helped out at one of the local churches, who hosted it in 2014. The short-sleeved sweater, I think came from JCPenney. That’s kind of bad. I’m having trouble remembering and I just got it at the end of summer. I like the light-weight, short-sleeve sweaters so much for summer stuff.

The necklace came from my sister. IF, I remember correctly, a friend of hers makes them.

I don’t have any pics of my flexi in my hair from this exact day, but just so I don’t leave anyone hanging, thinking, “I WONDER WHICH flexi she was wearing???” I do have a photo of the Rainbow Cluster flexi that I wore.

There you go! Wonder no more!!

And a happy weekend to all!! 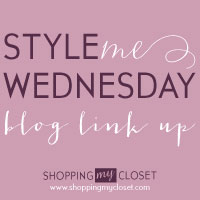