When you are fourteen years old, you don’t think you’re young. You don’t think you’re old. You are excited about life and growing up and being sixteen and having fun with your friends. You have peer pressure to deal with and whether or not you fit in with this group or that group. You feel like life is before you and being over thirty years old is light-years away.

At least that was some of my experiences when I was fourteen years old. I was never boy crazy, at least not compared to a couple of girls I knew. At fourteen, I noticed guys, but I wasn’t all that comfortable around most of them. I’m definitely introverted and thrived much better on hanging out with close friends whom I knew well.  And I certainly never gave a thought to meeting the man I would marry at fourteen years of age. Pretty sure my Mom didn’t have that planned out either.

That’s exactly what happened though.

My family had visited my mother’s sister and her family in Kansas almost every year while we were growing up, so a trip to Kansas wasn’t anything new. What was new was having my sister living in Kansas teaching at a small private school. What was new was my dad working at a different job with very little vacation time, so a trip to Kansas wasn’t figuring in to my parent’s plans. What was new was taking a car trip with a couple of my sister’s friends to visit her in Kansas. I didn’t know this trip held a major life event for me. God knew, of course. He had to be smiling.

Now, I didn’t go to Kansas completely oblivious. My sister and my aunt had mentioned the name “Matthew” to me and I had seen one or two pictures. This Matthew, who I did not know had also had the name “Deborah” mentioned to him by the same two people who were mentioning “Matthew” to me. My aunt from Kansas had always liked to offer suggestions to her nieces and nephews from the east, in a fun kind of way, so I didn’t take any of this too seriously. Besides when you’re the introverted fourteen-year-old that I was, you really can’t imagine why some cute guy would be all that interested in you.

I arrived in Kansas. After a late night of laughing and talking and being a group of girlfriends having fun together, we went to sleep. The next morning we did what any wise group of girls would. We headed to the city to shop and eat and laugh some more. We returned that evening to attend a Valentine’s Party for the young people in our church group.

We entered the party and were seated at a table where we could see the door and therefore the rest of the young people as they arrived. And I still remember happening to notice when my-husband-of-now walked in with a couple of his friends. And I remember after we ate, my sister introducing us. And I remember thinking he was pretty cute. And I remember feeling very comfortable with him right away-this introvert who didn’t love hanging out with guys.

One advantage to this Kansas land that I love, is its being sort of in the middle of nowhere. This meant that after some planned activities inside the building, everyone was herded outside to play Walk-A-Mile. This game involves pairing up the guys and girls and starting them off walking on a desired route. Then, you send a few single runners on their way, by giving them directions such as go forward five couples or back three couples. The single runner arrives at their designated couple and gives directions to the guy or girl they’re trading places with. Thus the game progresses. The girls outnumbered the guys that evening, so all the runners were female.  During the whole game I think I only got to walk with Matthew twice. Once was for a very short time and the other time was longer, but not long enough. And I wasn’t smart enough or dishonest enough to think about cheating and simply finding Matthew when I was running, instead of following directions. Fourteen years old is not so old, you know.

The next day, after church, we young people headed to Pizza Hut for lunch. As fate would have it, I ended up at a table with my-someday-husband’s friend. (Thanks a lot, sis!) Just the two of us. This girl was not impressed to be at a table alone with a guy she didn’t know. Not that he was mean or scary. He wasn’t. He was nice. After all he was good friends with my to-be-husband. It just didn’t fit in my comfort zone. I think God was smiling again. And then, this cute, young guy who had definitely caught my eye, all mentioning him to me aside, came over to our table and talked to us until the piping hot pizzas arrived to be eaten. I was happy. And comfortable. And sad when he went back to his group table to eat his pizza. (His not-so-favorite-food.)

That afternoon his cousin and my soon-to-be friend, who is now a very, very favorite friend, also decided to play matchmaker along with my sister and my aunt. She, in not so subtle ways, made it obvious that she thought we were a pretty good match. And God was smiling.

When there are miles involved and trips involved, there always comes the it’s-time-to-go-home part. This tale is no different. The time came to go home. And I went home. But a small piece of me stayed in Kansas. And some of Kansas went home in my heart. Though it would be a few months and then I would see him again and then it would be almost a year before I saw him again, there was a smile in my heart. The tiniest whisper of someday. Though we were both young and though I didn’t know exactly what the future would hold, I felt that there was something special and that I had a connection with this young Kansan.

And though fourteen sounds much, much too young for my daughter to meet someone, I am so, so thankful for this man of mine. This young man whom I met when I was fourteen, and who I married when I was almost nineteen. I look back at just how young we were, yet I wouldn’t change it or trade it for a different story. I bless God and I praise Him for giving me a husband and a best friend. We have our disagreements and our times of rubbing each other so much the wrong way, but there’s no one else I want in my story.

And I think the best MatchMaker ever, is smiling.

Today, I am linking up at:

The Finer Things in Life 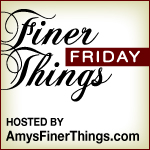